How to choose your Daytona model 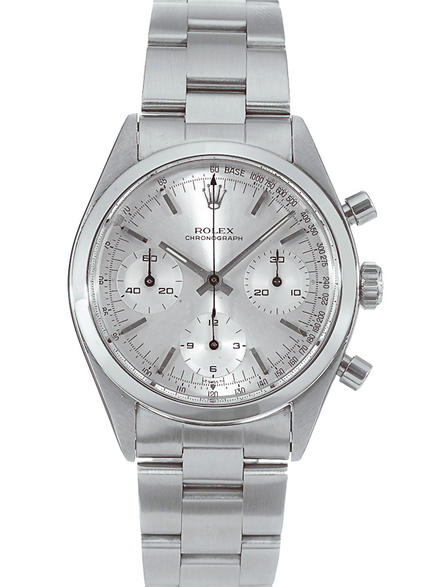 The mother of all the Daytona’s !
Introduced in 1960 and demarking itself from the older non-oyster Rolex Chronographs, its pure, modern design makes it a milestone in the genesis of the Daytona; the main difference between a late 6238 and and early Daytona are the smooth bezel and the dial that has no constrasting registers, but instead features a plain silver or black dial (or gold) – a very understated but modern piece of design. 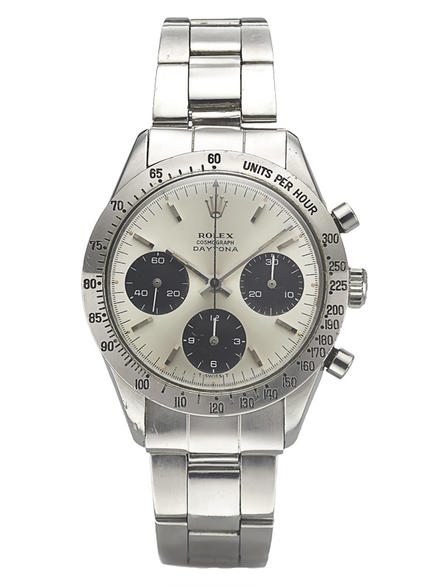 The first Comosgraph Daytona, launched in 1963 and produced in stainless steel, 14 and 18 carat gold versions until 1969.
Early versions featured a cream and “underline” dial and 300 units/h engraved bezel. Later models carry a 200 units/h bezel and a silver or black dial.
No “oyster” inscription on the dials, while the “Daytona” inscription (small or big) is introduced around 1965 (before it was just the word “cosmograph”). Newman/exotic dials in 2/3 colors both in black or white. 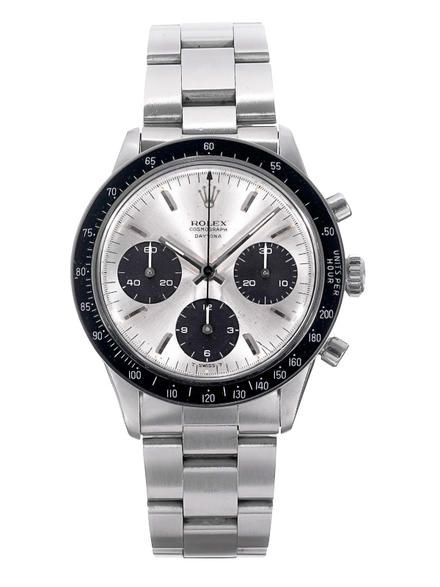 The “twin sister” of the 6239, except for the bezel which is in “bakelite” and the production starting later.
As from 1966, both the 6239 and 6241 have a different oval shaped case, differentiating themselves from the early 6239.
The Newman dials are the same than in the 6239. They all carry the “Daytona” inscription. 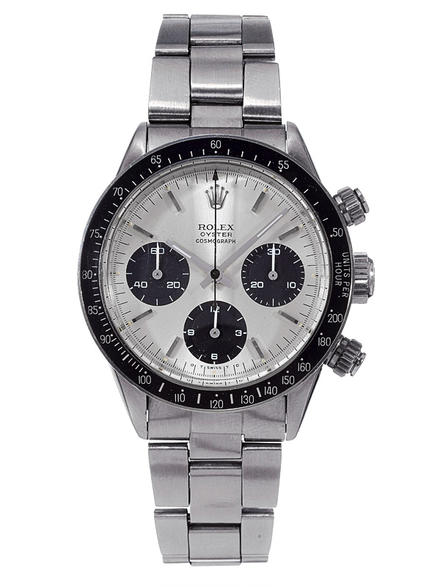 Initially produced as a prototype, the 6240 stands out from 6239/41 by featuring screw-down pushers for the first time. This is thus the first really waterproof Daytona, produced only in steel, with a “Bakelite Bezel” (apart apparently for some very early exemplars which featured a steel bezel).
This is the first Daytona to bear the inscription “Oyster”.
Very limited production due (i) to the fact that it was still a prototype and (ii) to the mild success it generated. 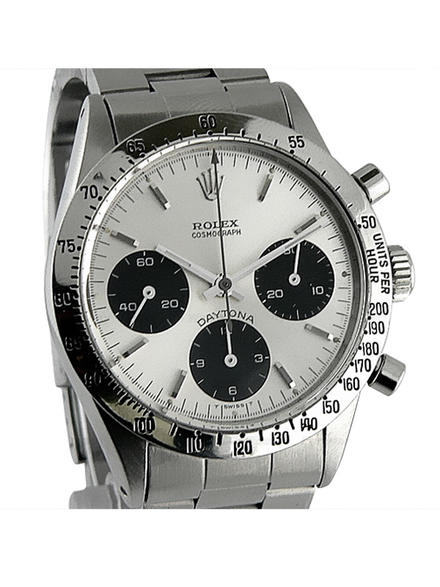 From the late 1960’s (probably late 1969) Rolex introduced a new movement in a watch which otherwise basically presented the characteristics of the 6239 – this new caliber, the Valjoux 727 was more precise and had now a speed of 21.600 a/hour (to be compared with the 18.000a/hour or the previous calibers).
This reference is generally accepted as the least produced Daytona (6269/707 put apart) since its production supposedly stopped in 1970, while - funny fact - its twin sister 6264 was produced until 1972.
A gold 6262 is probably the rarest Daytona available.

The 6264 is the twin sister of the 6262 and is basically a 6241 with a 727 Valjoux caliber.
As for the 6262, the production numbers are very low due to the short production period.
To many collectors, the 6264 is considered as the “graal”, the most desirable of the push-down Daytonas.
Newman/exotic dials available in 2 or 3 colors (much rarer). 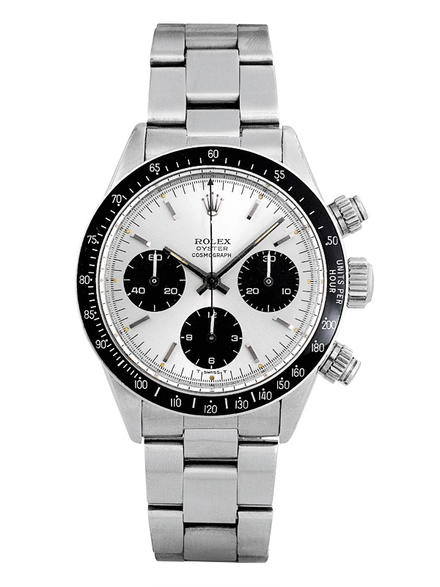 In the early 70’s – at the end of the production period of the 6262/4 – Rolex introduced their new models, the 6263 (and 6265) which featured an evolution of the screw-down pushers introduced on the 6240.
The main goal was of course to obtain a better waterproofness but some esthetics’ details were also modified which globally changed the design of the watch – the “impression” made by a 6263/6265 is more muscular, more present than the one given by a push-down model, although the case diameter are identical.
The watch seems to be bigger and more modern. This last generation of screw-down Daytona were the longest produced and the most popular, with continued success until the late 80’s.
Newman dials existed in two different version in white and black (much rarer), there is a huge controversy/mystery about the gold exotic oyster dials (not to mention the red ones !). 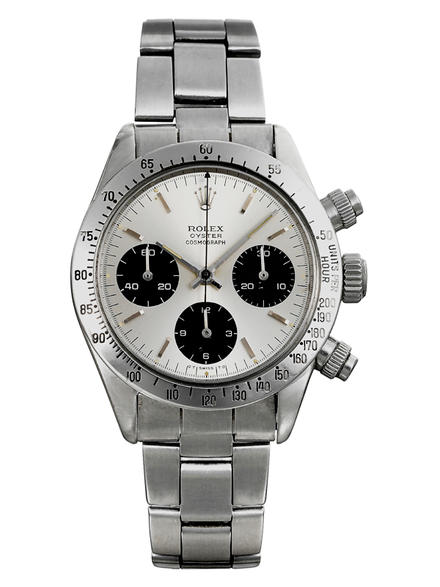 The twin sister of the 6263 but with a metal bezel (steel or gold).
This new generation (6263 and 6265) introduced many new different types of dials were, amongst which the very popular “Red Daytona” (big or small) while the gold models had the “Superlative Chronometer Officialy Certified” inscription for the first time, celebrating the improvement brought by the 727 Caliber Newman/exotic dials were only produced at the early stage of production, which makes them the rarest (and most expensive) Newman on the market.
The winding crown is also bigger than on previous versions. 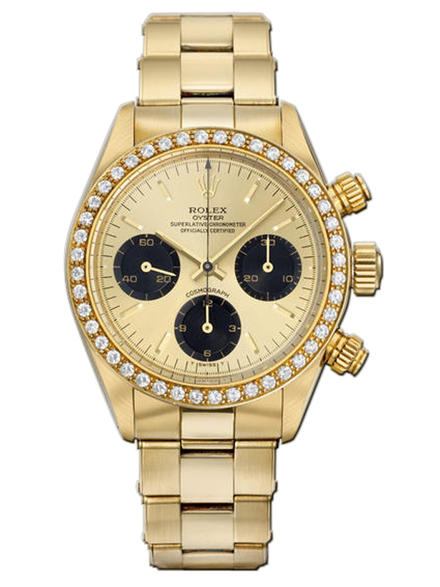 In the early 80’s Rolex introduced the new reference 6269 and reference 6270, the most luxurious Daytona versions ever produced and manufactured in very limited numbers.
These models 18K gold cases, featuring bezels embellished with brilliant (Ref. 6269) or baguette (Ref. 6270) cut diamonds.
Those watches were each almost unique and in terms of production, are the rarest.
We are Rolex biggest and most passionated fans. We truly love and embrace their products as well their incomparable, impeccable after sales services. However, we are absolutely not affiliated with them/the Rolex brand in any way - we are simply the best independent experts around !